Chris Waller trained Stand To Gain has taken out today’s Sydney Cup at Randwick racecourse ahead of the fast finishing Older Than Time and race leader Solid Billing who stuck on well to run third.

Sydney’s leading trainer Chris Waller landed his second Group One win in 40 minutes when Stand To Gain ploughed through the Randwick mud to win the Sydney Cup on Saturday. 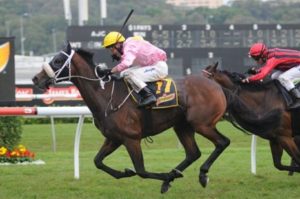 In a race marred by the falls of Hawk Island, ridden by Glyn Schofield, and Kerrin McEvoy’s mount Tinseltown at the 600 metres, Rod Quinn enjoyed a lucky pick-up ride to guide Stand To Gain to a gritty victory.

The five-year-old, who last start was only 10th to Cup rival Once Were Wild in the Chairman’s Handicap (2600m) two weeks ago, settled midfield but was poised to strike at the top of the straight.

He took the lead over the rise but was soon under threat as C’est La Guerre began a charge down the middle of the track.

But Stand To Gain dug deep and fought on strongly to the finish of the 3200 Group One feature to beat Older Than Time and Solid Billing.

Quinn struggled to remember his last Group One winner.

“It’s been a long time coming.”

Waller, who earlier won the Queen Elizabeth Stakes with My Kingdom Of Fife, said Stand To Gain was a superior wet-track horse.