Michael Kent trained Absolutely has broken her maiden status in today’s AJC Oaks at Randwick racecourse ahead of race favourite Shamrocker in second and the fast finishing Pinker Pinker in third.

Outsider Absolutely, a maiden before Saturday, has taken out the 100th running of the AJC Australian Oaks at Randwick. 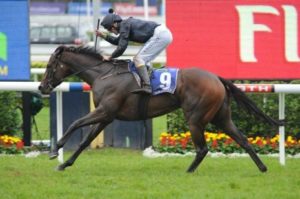 Aided by a rails-hugging ride from Brad Rawiller, the Mick Kent-trained filly charged to the lead at the top of the straight in the 2400m Classic and bounded away from AJC Australian Derby winner Shamrocker to win convincingly.

Absolutely was also an acceptor for Saturday’s Flemington meeting but connections pulled the right rein with the daughter of Redoute’s Choice and came away with the $330,000 first prize.

Rawiller jumped Absolutely smartly from barrier three and had her perfectly placed to pounce in fifth place rounding the home turn.

As the field fanned Rawiller elected to stay on the inside in the heavy conditions and his decision proved decisive.

“Such a great relief,” Rawiller said.

“It’s the first Group One for Mick I’ve ridden.

“It gives me just good satisfaction, you know?”

Kent was glowing in his praise of Rawiller’s ride.

“No-one had been on the fence and we took advantage of that.

It was the filly’s first win in seven starts which before Saturday had netted five placings and $113,700 in prize money.

Absolutely paid better than $26 on the NSW TAB.